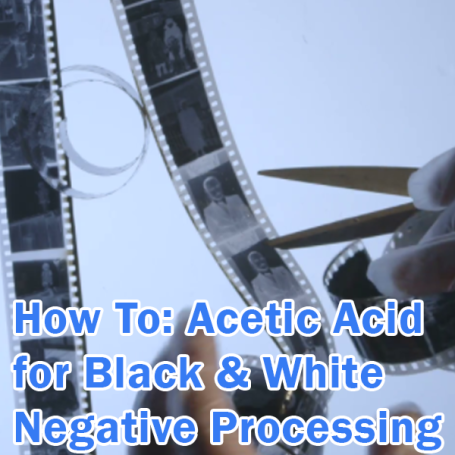 Photographic processing is perfect for a unique twist on your typical Christmas pictures! This blog is even fun to do together as a family.

All photographic processing use a series of chemical baths. Processing, especially the development stages, requires very close control of temperature, agitation and time.

PLEASE NOTE: EVERY CHEMICAL SHOULD HAVE ITS OWN GALLON JUG AND FUNNELS. DO NOT USE THE SAME EQUIPMENT WITH THE CHEMICALS!

Stop bath is a chemical solution responsible for bringing the developing of the image to a halt. If the image stays in developer for too long.

Start by setting up your dark room. It doesn’t take much to set up your own darkroom. A room that is light tight is essential, because photographic paper and film are light sensitive. Start off by closing the door and turn off the lights. *Make sure to check for any sign of outside light creeping through. If there is, use a towel, black bin bag or duct tape to block the intruding brightness.*

You will need easy access to running water for chemistry mixing and print washing.

This ratio is a 1:3 Chemical to water mix. Mix the Acetic Acid 6% and water together using a 1:3 ratio. use the funnel to avoid any spillages. Store this in a Jerrycan. This is a working solution.

The ratio is a 1:4 Chemical to water mix. Mix the fixer and water together (use a funnel to avoid a spillage) and store in another Jerrycan. This is another working solution.

Mix the full packet (4.4oz) with 1.25 gallons (4.7L) of water. This chemical comes as a powder, and you need to ensure that it is thoroughly mixed. Store in a Jerrycan.

Use the bottle opener to open the bottom of the film canister. While only touching the film negative from the edges, pull the film out of the canister. The film will be taped to the center film spool. Make sure you cut it off right at the base of the spool or you could cut through your images. Cut the tip off the film. (This is the odd shaped piece that sticks out of the canister when you first buy the film) so that it’s flat. Please Note: You only need to cut about 1 inch (2.5 cm) off the tip.

Spool the film onto the film reel. While not touching the surface of the negative, slide the negative into the opening of the reel.

Place the reel inside the developing tank, and screw the lid onto the tank. At this point you can now turn the lights back on as the tank is now light-tight. Pour water into the tank and let this stand for 1 minute. Even though the developing tank has a hole in the top, don’t worry this is for pouring chemicals and won’t have any impact on your images. Pour the water out after one minute. This will make the film swell up and accept the developer solution.

Bring the developing tank to the sink with your chemical jugs floating in water. Check the developer chemical with the thermometer. If this is at 20 degrees Celsius, then you are ready to go. Please Note: If the solution is higher then keep checking back. However if it is lower, add some hot water to the sink the Jerrycan are floating in.

With your stopwatch next to you, pour the working developer into the hole in the top of the developing tank. Do this quickly and start the stopwatch as soon as you’ve poured the developer.  Smack the developing tank on a counter a few times to dislodge any bubbles that might be clinging on to the film.  Swirl the tank around for 30 seconds and leave the film in the developer for as many minutes that is appropriate for your film type. *THIS RESEARCH MUST BE DONE BY YOURSELF AS WE DO NOT ADVISE ON THIS*. Swirl the film again for 5 seconds every 30 seconds. Depending on the style you are going for depends on how many times you want to swirl the image. *AGAIN THIS RESEARCH SHOULD BE DONE INDEPENDENTLY.*

When the stopwatch has reached 10 seconds from the end of your time, start pouring the developer out of the top of the tank and into the sink drain. *DO NOT TAKE THE LID OFF THE DEVELOPING TANK*.

For the stop bath you can use water at 20 degrees Celsius. With your stopwatch next to you, quickly pour the stop bath into the top of the developing tank until the tank is full. Pour straight from the Jerrycan. Start the stopwatch when you’ve filled the tank up. Once again, smack the tank against a counter a couple times to avoid any bubbles. Leave the film in the stop bath for 1 1/2 minutes. The stop bath is to neutralise any remaining developer left on the film.

When the stopwatch has finished, start pouring the stop bath out. If the stop bath remains yellow in colour then this is good to use. Pour this in your HDPE Bottle and use a Child Proof Cap to seal.

Pour the fixer into tank until it’s full. If your fixer is pre-diluted then there is no need to dilute further. Start the stopwatch once the tank is full. You are going to leave the film in the fixing solution for 6 minutes. *IF USING RAPID FIXER, LEAVE FOR 4 MINUTES RATHER THAN 6*. Smack the tank against the counter to avoid any bubbles. Swirl the film again.  3 seconds every 30 seconds. After 3 minutes, you can open the tank.

Once the stopwatch has reached 6 minutes, pour the fixer out of the tank. *DO NOT RE-USE THE FIXER*

Unscrew the top of the developing tank and expose the film negative to light. Once the film has been “fixed”, it is no longer light sensitive.

Pour straight from the Jerrycan. Smack the tank against the counter to avoid any bubbles. You are going to leave the film in the hypo-clearing agent for 1 1/2 minutes.

While the film is in the hypo-clearing agent, start running some water and bring the running water to 20 degrees Celsius. After 1 1/2 minutes, dump out the hypo-clearing agent. *DO NOT RE-USE THIS CHEMICAL*. Put the developing tank under the running water. It’s time to wash all the chemicals off the film. You are going to leave the film under the running water for 10 minutes. The water should fill up the developing tank and overflow. Let it overflow. Every few minutes, dump out the water and allow the tank to fill with fresh running water. Ten minutes is the minimum time to wash the film, but you can do it in a longer time. It is also important that you are washing the film with 20 degree water.

After the 10 minutes are up, lift the film reel out of the tank and lightly shake off any remaining water. Turn the reel clockwise (this could be counter-clockwise, depending on how you’re holding the reel) until the top half of the reel comes apart from the lower half of the reel. Use one of the film clips and clip it onto the end of the film negative. By lifting up the clip, pull the film up out of the reel. If everything went well, you should see your pictures on the negative. Clip the other film clip onto the bottom of the negative. This will act as a weight.

Hang the negative up to dry in a room temperature, dust free room. Leave the negative to dry for at least 2 hours.

Your negatives are now ready to use!

NOTE: BEFORE USING ANY OF THE PRODUCTS LISTED PLEASE READ ANY SAFETY AND PRECAUTIONS TO THIS PRODUCT BEFORE USAGE.

APC Pure does not accept any responsibility, this is a guide only.